I recently decided to move all my code under GIT, I’ve used it before and I’ve used also SVN, but I find GIT to be more straightforward in some aspects.

In order to use git I needed a place online where to store my projects, and I thought that github could be a good place, but the fact that you have to pay to keep a project private just didn’t sound right in my opinion. Of course github is there to make money (specially now that M$ bought it), but I prefer to have a simpler setup and be able to do things my way as much as possible.

So I started planning what I wanted my git server to have. Here’s a list:

Installing a git server is quite simple once you know how it works, on my server it was a matter of having a bare repository setup but in order to have the level of security that I wanted there were a few steps involved.

A bit of a disclaimer here, I use a Slackware64-14.2 on my server and Slackware64-current on my laptop, so all the commands here worked for me but I can’t be sure if the procedures that I followed will work on different distros with different setups. If you have any trouble following what I’ve done let me know in the comments and I’ll try to help you.

I’ve added a new user and group to my server but before doing so I added /usr/bin/git-shell to /etc/shells in order to use it as login shell for my git user.

now the user is all set and ready to be used. Next step will be to create the .ssh directory and the authorized_keys file to hold the keys for the developers that have to access the git server. Here’s how I did it:

ok, now the files are in place and the permissions are correct for ssh to work well.

Let’s head back to my working computer, I created an ssh keypair for my usual user and copied the public key to the authorized_keys file on the server. I won’t go into much detail on how to do so, but just a suggestion, keep it without password, it’ll be much faster to work later.

Since I have ssh access to the same server for my normal user I used the ~/.ssh/config file on my computer to set a new host that will ease my access routine for the git user as well as my regular user, that’s my config (more or less):

and ssh will take care of all the options and start the connection with the correct credentials for me. Neat!

Now that the access for the git user is setup we have one last thing to do before being able to use it. We’ll give him only limited commands to use, That way the git user will be even more limited and much more secure. Inside the documentation shipped with git there’s a lot of scripts to get you started with this, so we’ll copy them inside a special directory called git-shell-commands, like this:

Now we have 2 commands inside the git-shell-commands directory, list and help, the first will show all projects inside the /var/git directory and the other will show a simple help text and a list of all the commands available. Now to give you an example of how easy it is to add commands to the git-shell I will create a simple command that acts as the clear command, it will clean the screen, to do so, from inside the /var/git directory I did:

and now I have a “clear” command available for my git user. Another useful command will be “create” to add a repository and a “destroy” to remove it. Let’s see them in the next page. 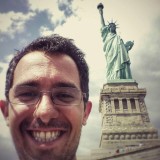 Hi, I'm Danilo, I own this website.
I love Linux, I prefer Slackware over every other distribution, I live, eat, breath WordPress. I'm interested in technology in general and I try to write on this blog whenever I find the time..

Enjoy your stay on danix.xyz

This site uses Akismet to reduce spam. Learn how your comment data is processed.

We use cookies to ensure that we give you the best experience on our website. If you continue to use this site we will assume that you are happy with it.I understandRefuse cookiesPrivacy policy
reset your cookies consent for danix.xyz